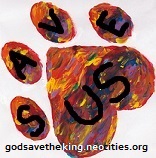 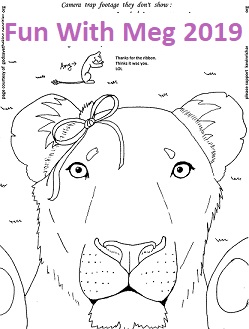 ~ I'm going to add a paragraph, or two, or three, for this one. ^_~ It hasn't yet ceased to amaze me how some people are aghast, "Why don't they turn on him? They're wild animals!" Yes, they're wild animals. Unfortunately, some people equate "wild" with "vicious" or "mindless killers". I recall a quote from a poster I had as a teen, "Man calls an animal vicious when it defends itself when he tries to kill it." That's pretty backwards.

Lions are no more inherently interested in going around killing people than a bee is in going around stinging people (and that is from someone who's been on the receiving end too many times! ^o^). Lions are intelligent, and so is Kevin: If one of them doesn't want him in their space, he'll respect that. They trust him, and enjoy his company, and have no reason to kill him. Kevin has a familial bond with the lions in his Sanctuary, developed over years and years of caring for them. It's not like he just goes willy-nilly into enclosures with any old captive lions that he doesn't have a respectable relationship with.

Now, if a stranger were to just waltz in there with them, of course that wouldn't end well, as the lions would feel the need to assert themselves over an intruder to defend their territory and pridemates. If you don't respect Nature and get hurt, that doesn't make Nature "vicious man-killers".

Perspective: Some of the most dangerous animals in the world don't have claws or fangs. ;p (see pg41)

On this note, as I often see reporters and commentors using the word "tame": Kevin never ever claims his lions are tame. You will get hurt, or killed, if you don't respect that lions in parks are wild animals that are habituated to humans, therefore not afraid of humans. Habituated - not "domesticated". Captive lions are NOT "tame". (In the videos you can quite plainly see there are "wild animal" warnings all over his Sanctuary.) Now, imagine if this lioness didn't like you. ^,^